A nice relaxing quiet Thursday night and Jim says, we are going to New York tomorrow - NO.  OK let's go to Nashville - NO.  It's 13 hours away.  Well figure something out we are going on a roadtrip.
Well I love roadtrips.  So the next morning I start scouting out places that are within 10 hours of us and hopefully at least 10 degrees.  I have always wanted to go to Williamsburg, VA and we can stop at Washington DC on the way.  Perfect.  Start packing, should I take socks, NO - ok add in a pair just in case.  Winter coat or spring - Spring.  OK throw in the winter coat just in case.  Golf Clubs - yes - no - maybe - NO way to much to pack then I would need golf shoes and everything.

Grab the cooler bag throw in some water, oranges, bananas, crackers, almond butter and maybe just a couple shots of rum with a couple cans of coke.  Note for the future - always have a screw top bottle of wine around you never know when it may come in handy.

Pick up Jim at 1:30 in Toronto and off we head.  Up to the Gardiner and stop, that's normal.  Remember this is chill time, just moseying on down the highway.

We have an 8 x 10 picture of the route to Washington DC.  No other maps, no gps, no US plan so phones are turned off.  No problemo, just moseying down the highway.

Pass through customs and Buffalo and we are on to new territory.  Is that snow falling, c'mon man seriously there was no snow in the outlook. We pass Ellicotville on the 219.  For some reason Jim has become very dyslexic when talking about highway numbers.  The 219 became the 290. The 15 became the 370.  They weren't even similar.  For anyone who knows Jim and has driven with him, he is a little bit of a control freak.  And after driving down the dvp to work every day for over 30 years he doesn't totally relax in the car.

I'm just driving along when Jim realizes that we have somehow left the 219 and are heading east on the 86.  Oh well I said we had to go east eventually.  Let's stop at the next little town of Hornell and get a map.  We pull off the highway, we drive through the whole town including 5 red lights and not a gas station.  Jim is ramping up to one of his favourite rants of all time.  Little towns, medium towns, big towns and how the only thing that makes a politician important is to add another light into the town.

The air in the car is starting to heat up.  Jim wants to head back to Niagara.  Nope I'm going to Washington or Corning or somewhere I've never been.  Not bad we have been on the road 3 hours and this is our first hissy fit.  It's going to be a good one though.  We arrive at the 390 - north to Rochester - south to Corning.  Jim says fine we'll keep going, NOPE - I'm going home.  The heat in the car now turns a little frosty.  As my dad says "the silent treatment" has crept into the room.  It can last for hours.  After 10 minutes of driving we turn a corner and there's a blizzard - a real blizzard.  I'm still driving and no way I am going into a blizzard and no way am I giving up the wheel of the car yet, so U-turn and off we head south.  Both of our little fits have calmed down and off we head to Williamsport.

Only my husband would know that Williamsport is the home of the Little League World Championships which for the first time this year had a girl pitching.  Pennsylvania is a beautiful road trip and hwy 390, 99 and 15 (which to me are all the same highway) is amazing.  The highway winds through the mountains with the Susquehanna river running beside a fair bit of the way.

It's approaching 8 and we find a lovely Holiday Inn Express right off the highway.  Being home to the world championships, their downtown is lovely with lots of hotels and restaurants.  We find our way to the local brewery - the Bullfrog.  Great craft beer, a wonderful pizza for me and burger for Jim.  As much of their food as they can is local.  There is a large Amish farming community still in Pennsylvania.  Great band, but we are heading to bed, still 4 hours in the morning to Washington.

I am so glad we didn't keep driving last night.  The countryside is marvelous, big mountains, big vistas, lots of winding roads (would have been hanging onto my seat at night).

Well 12 hours of driving later and we have arrived in Washington.  The drive in is a little scuzzy but then you get to the centre of DC and WOW.  What a visionary George Washington and Pierre Charles L'Enfant - the architect were.  We stayed at the Washington Plaza walking distance to everything we wanted to see.

Is there ever a day that goes by where there isn't a protest in front of the White House.  Now if you are going to work from home, this is pretty impressive. 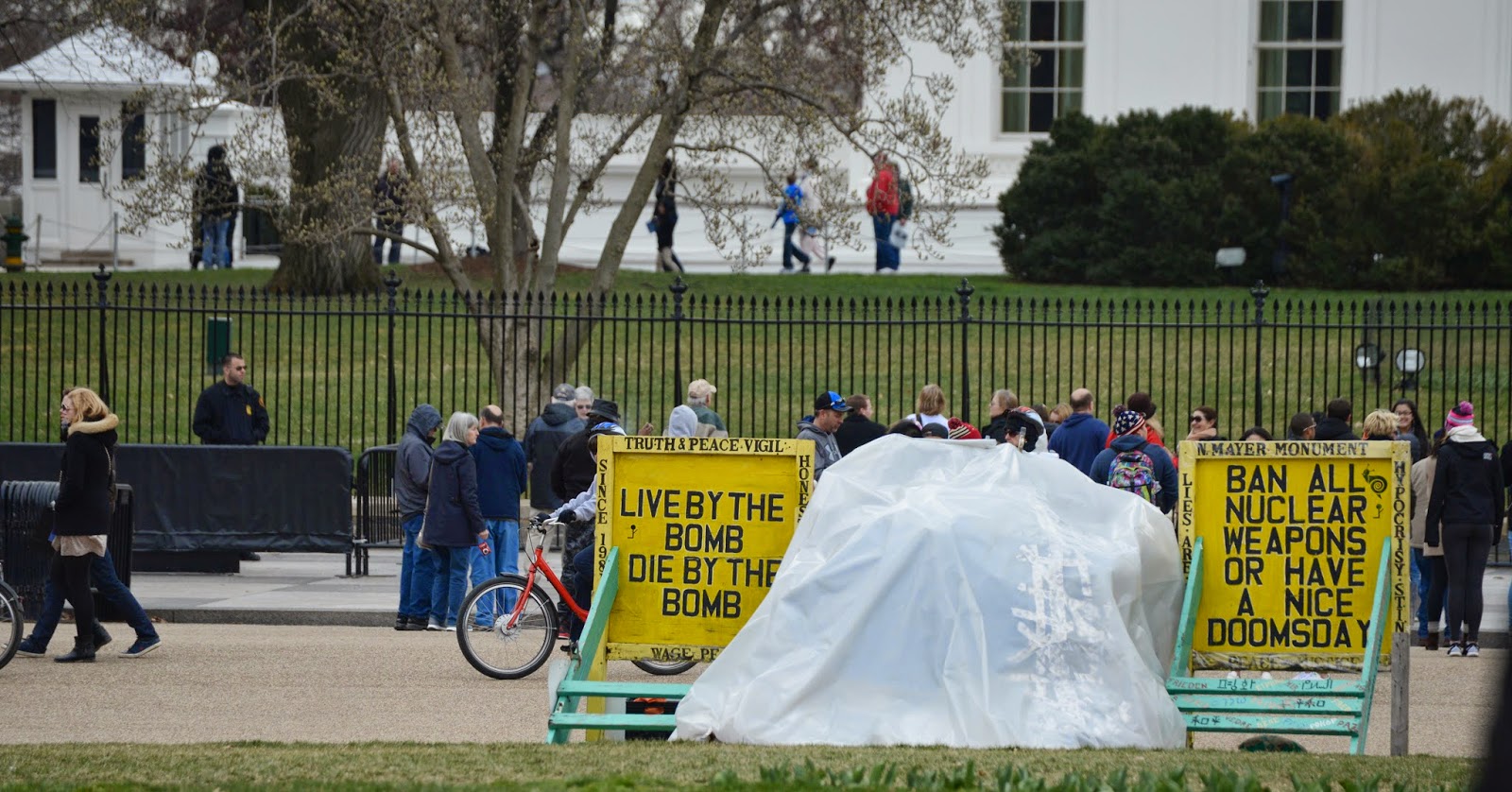 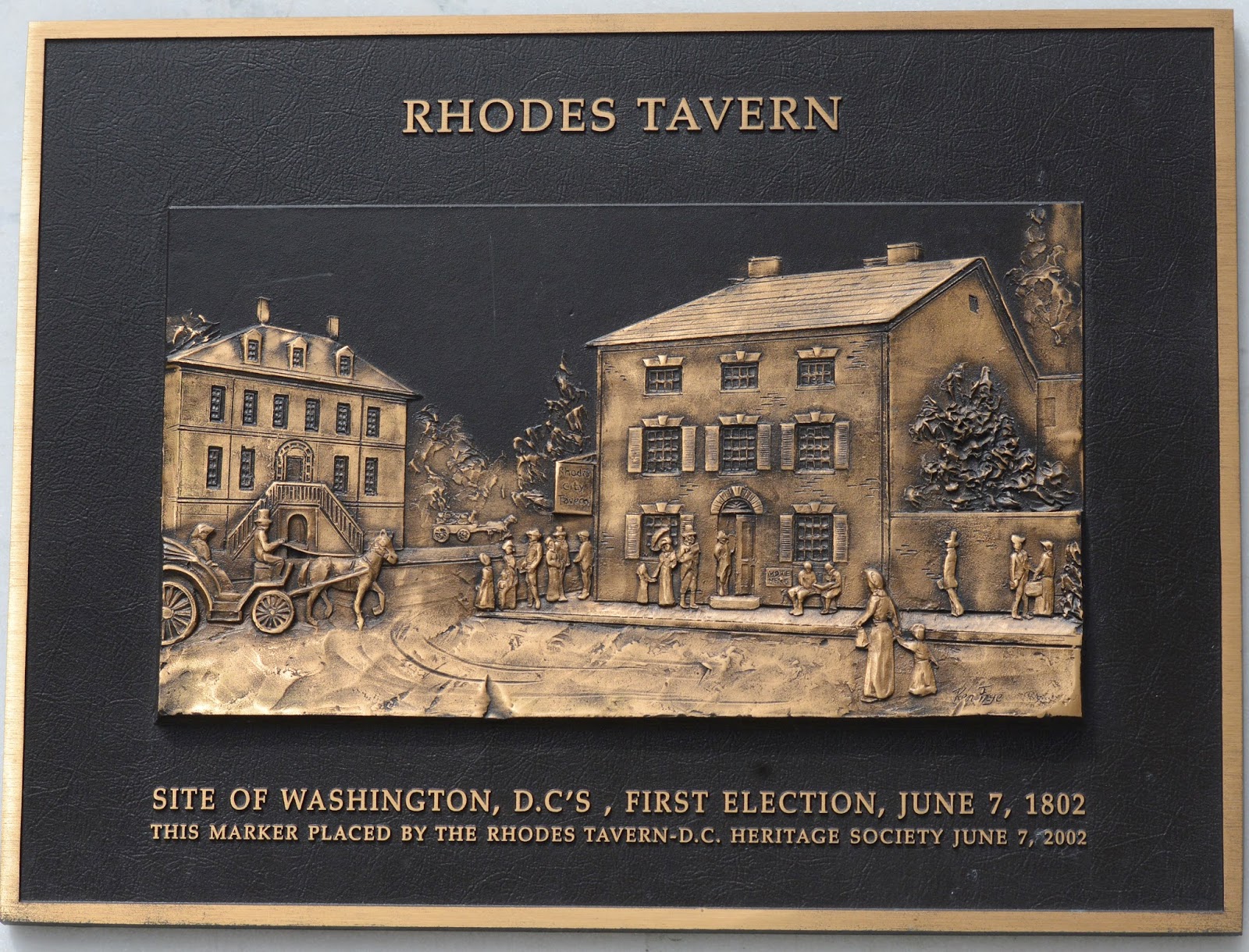 We stopped at "The Hamilton" for lunch, Jim is very relaxed now.  All the hotels and bars around the "Mall" (the area around the monuments) are old, woody bars with lots of character that fuels your imagination with images of cigar smoking port sipping bigwigs conducting deals to save the world going on.  We did not see anyone famous, but we did see someone with a security bud in his ear (or possibly his iphone :)) 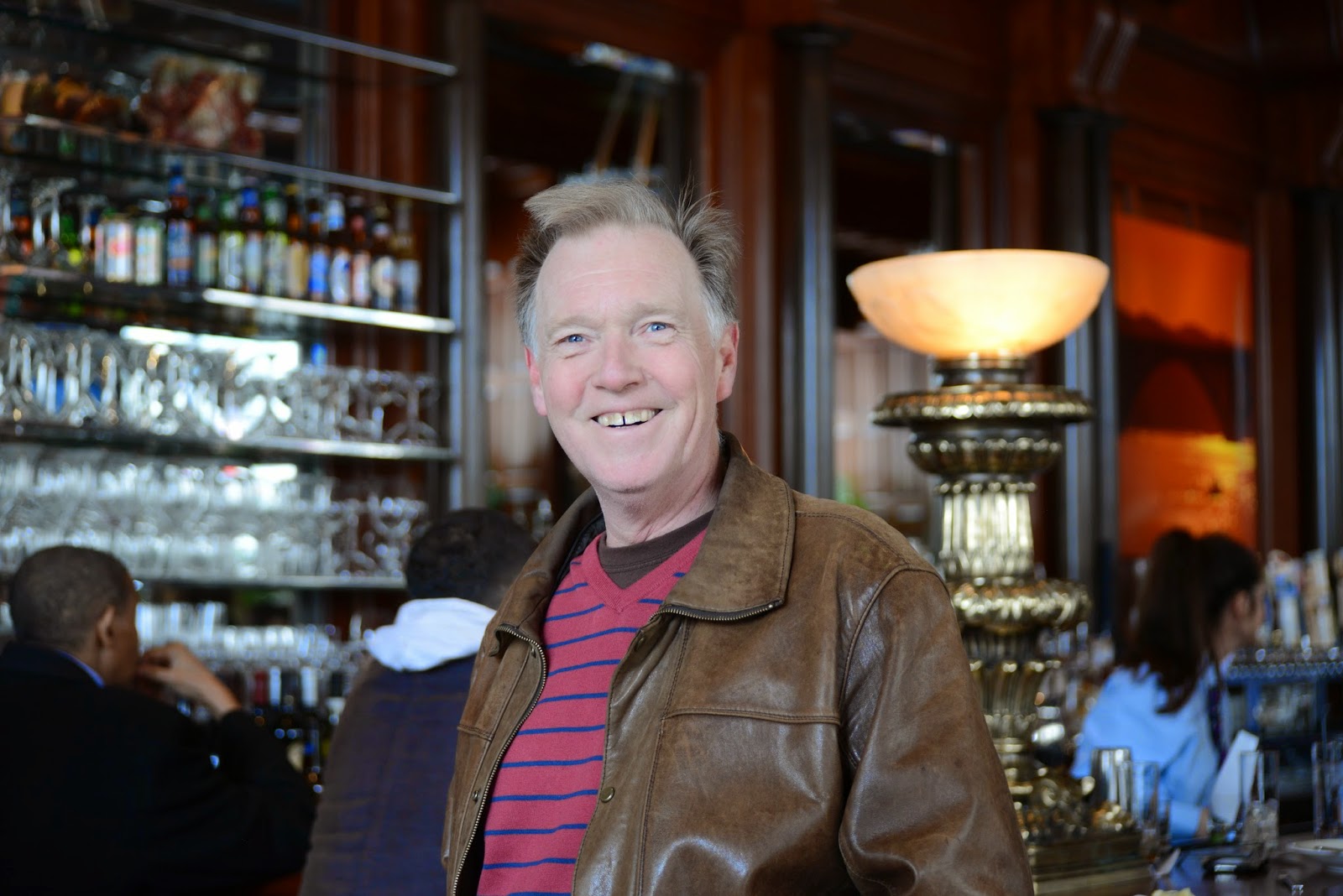 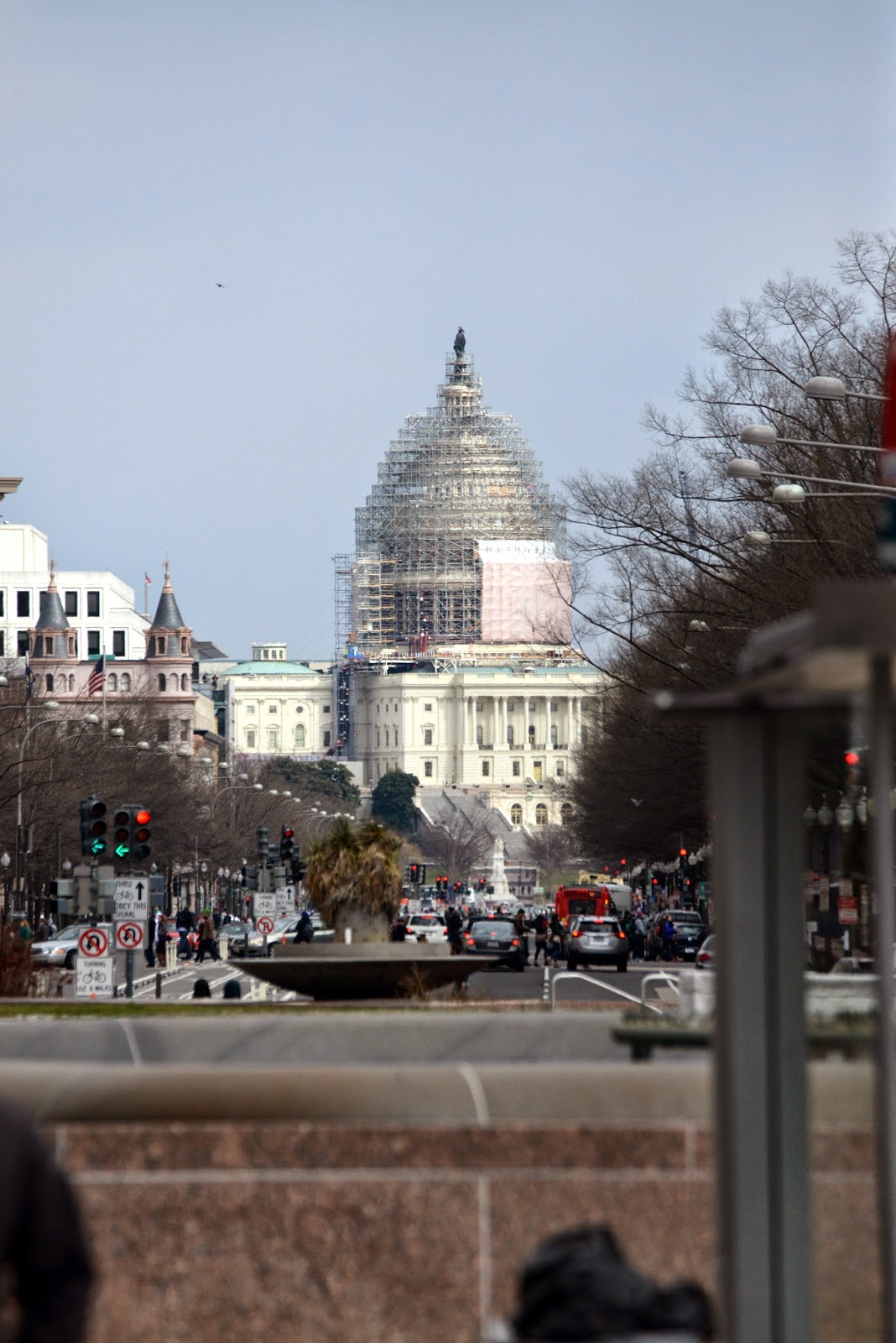 There were a few homeless people, but not as many as I thought there would be. 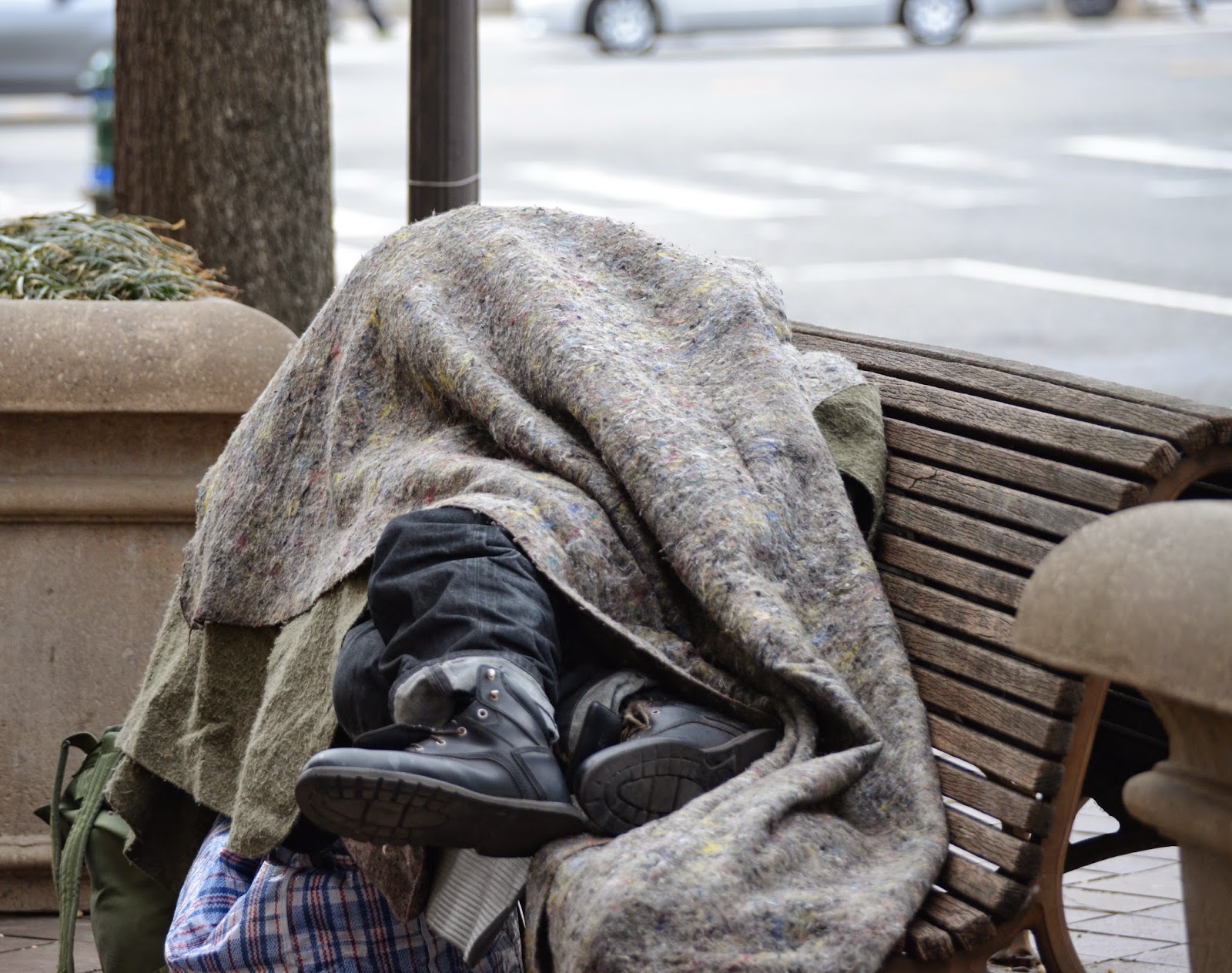 BTW - you know that 10 degree weather we were looking for.  Never found it, after an hour of walking around we finally stopped and bought a toque.  I could barely get my hand out of my pocket to take a picture.

World War II holds a dear place in my heart having had both of my parents serve in it.  None of my family would have been here if they hadn't been deployed to Ceylon where they met and married.  Even at that it took a while for the families to forgive them, my dad coming home with a "jordie"  (English born) almost started WWIII.   The WWII memorial in Washington is a big circle (as a number of monuments are) with one side dedicated to the Atlantic and one side to the Pacific tour.

At the entrance to the memorial there was special mention made of the Women and their contribution to the war effort. 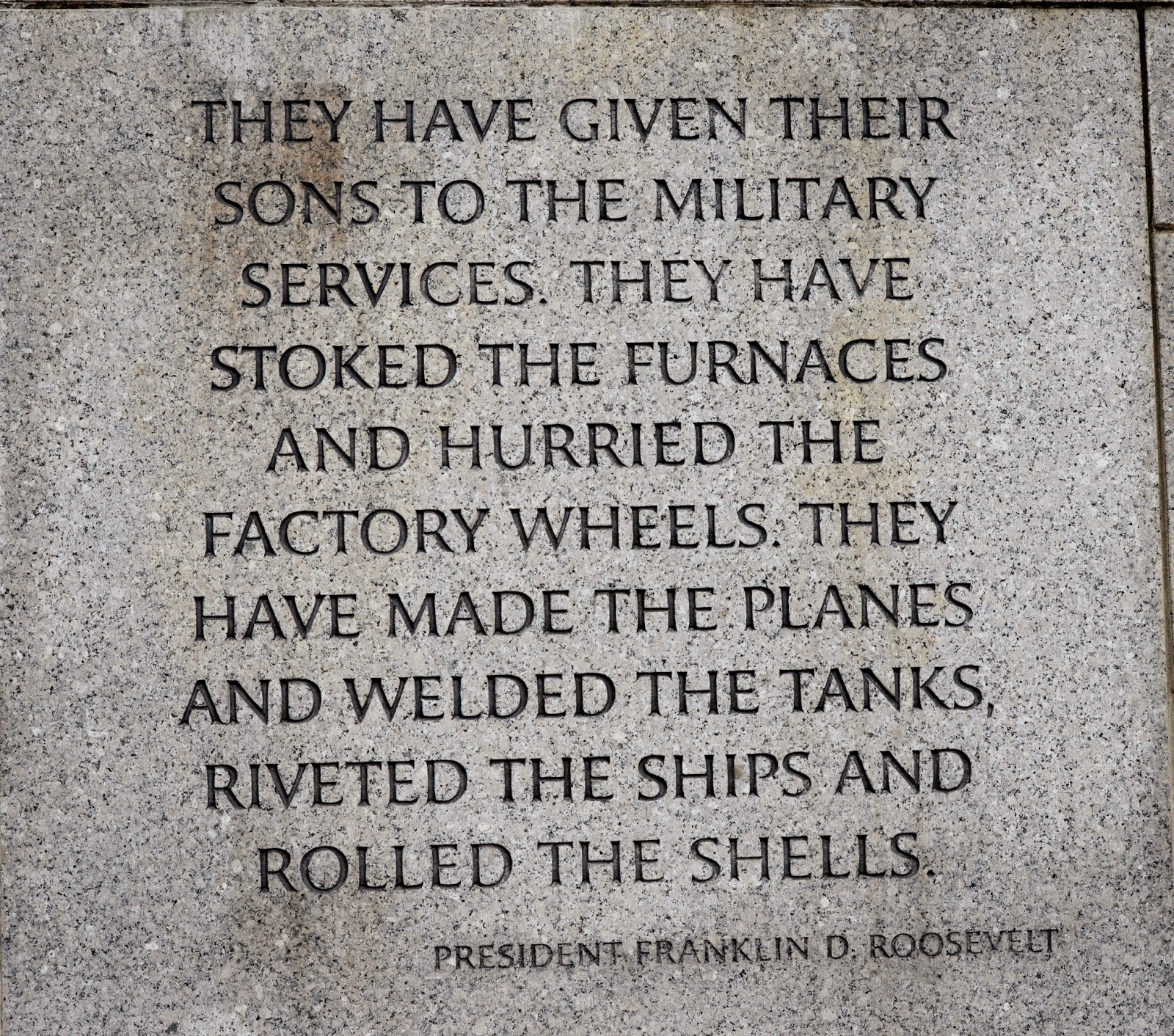 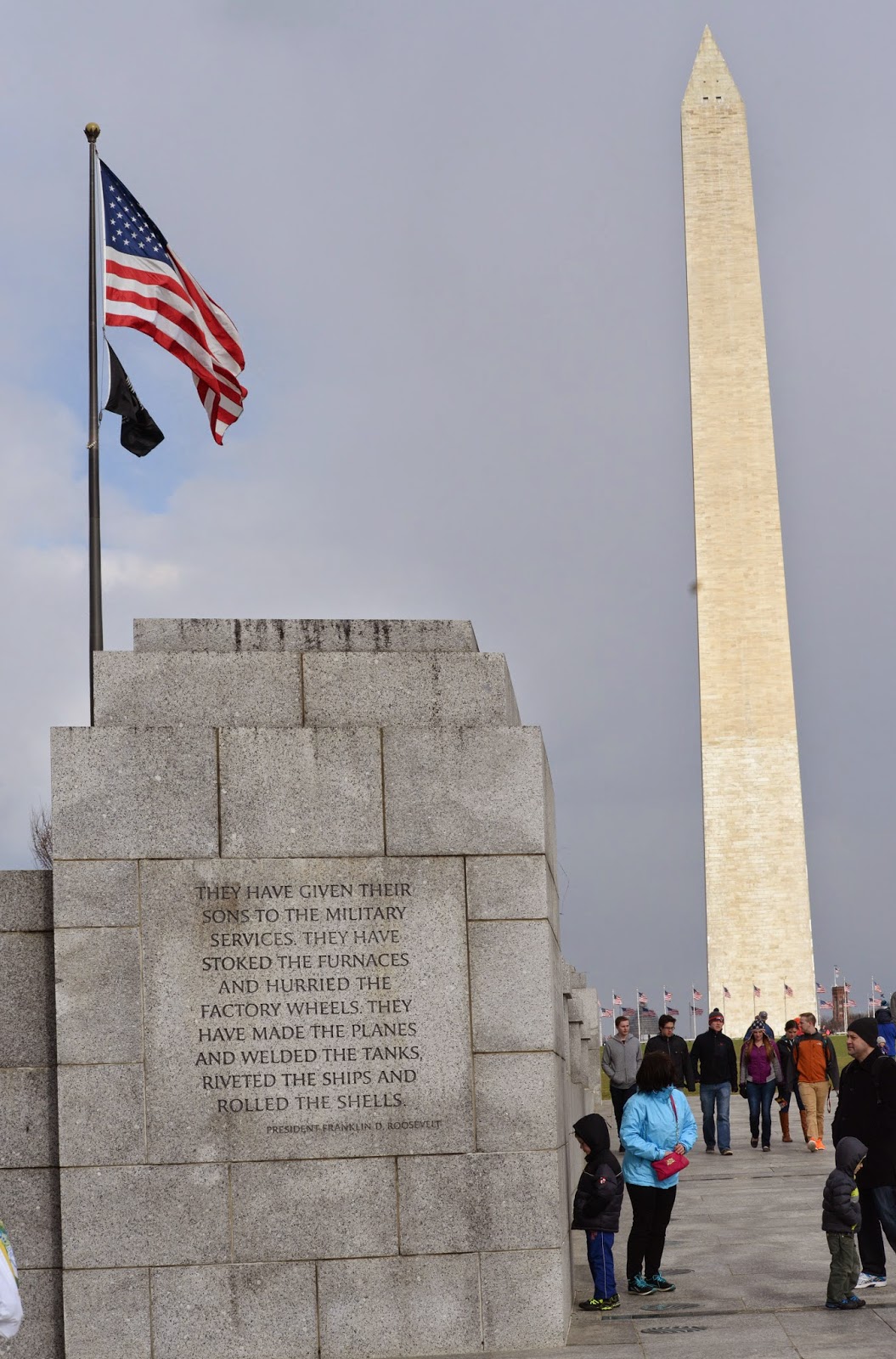 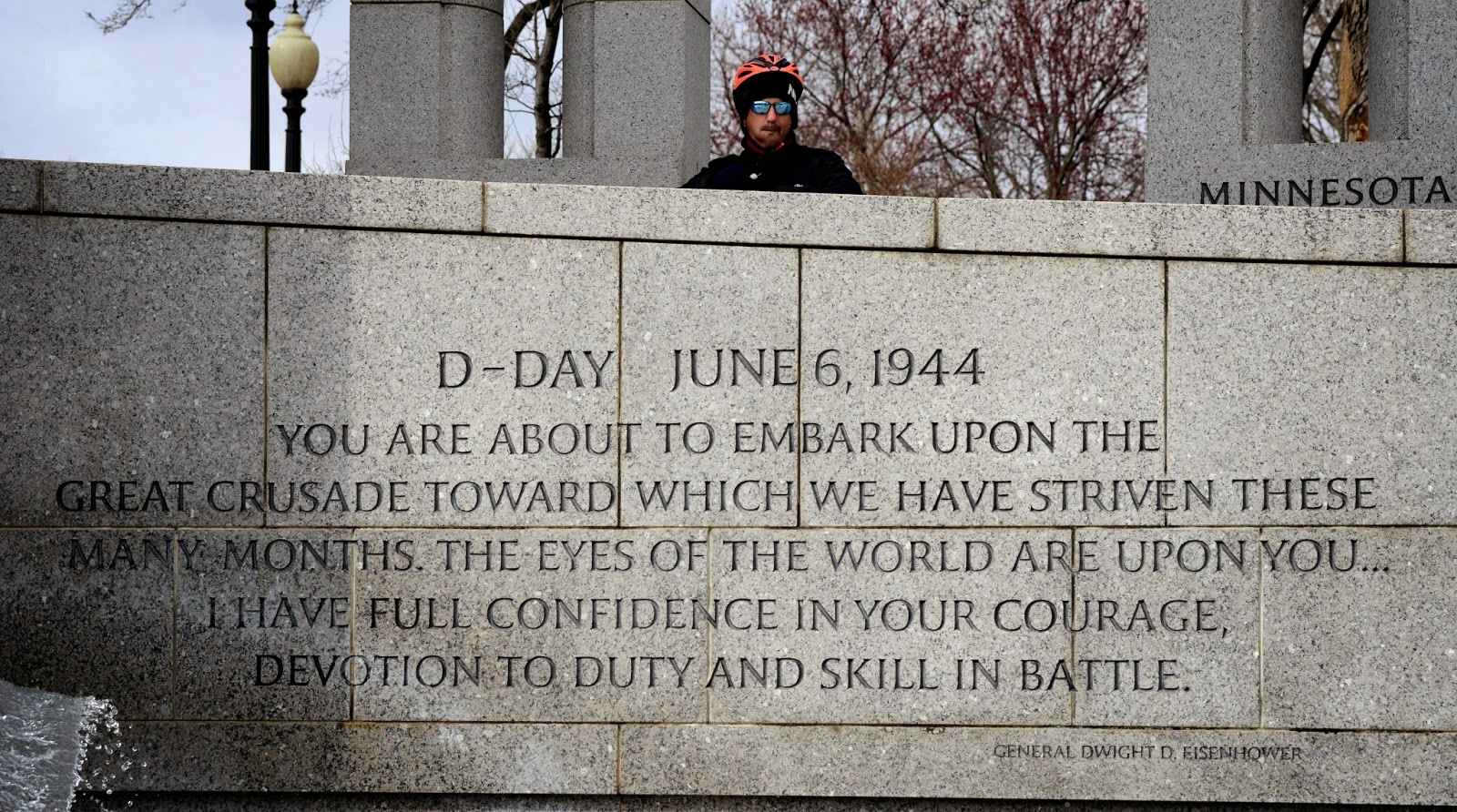 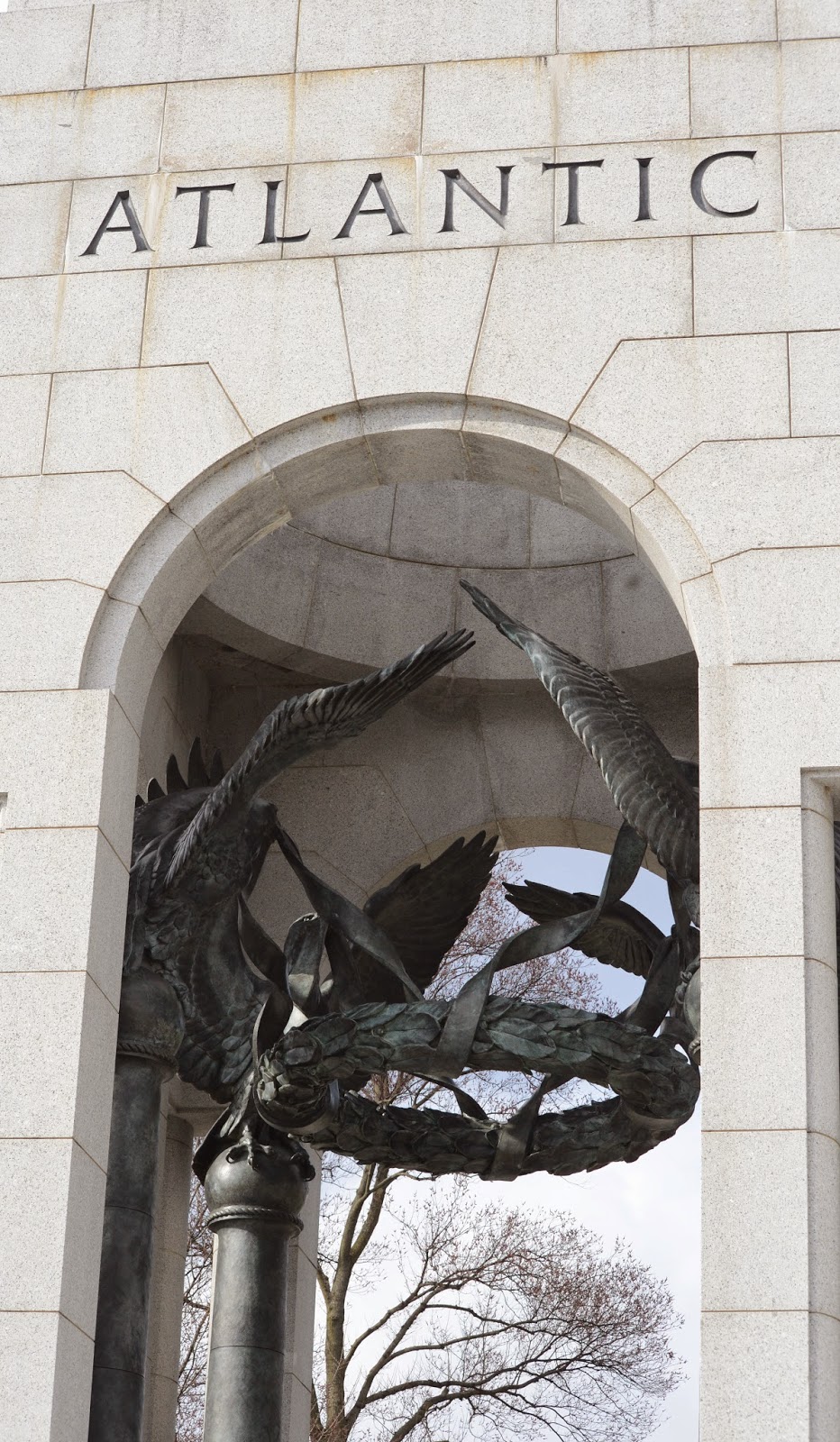 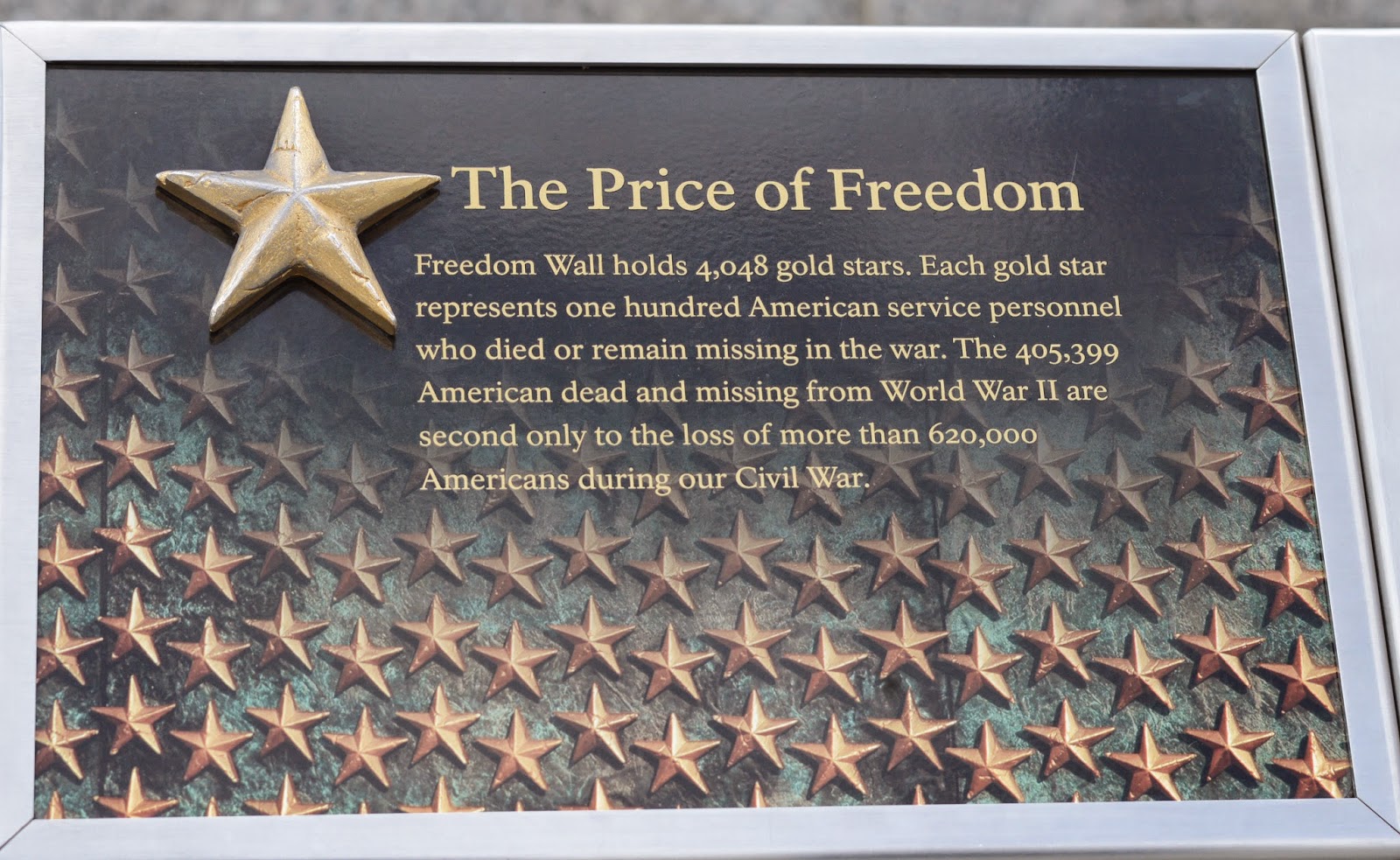 Next stop the Lincoln Memorial.  How many movies can you remember where this sculpture of Lincoln is in it. 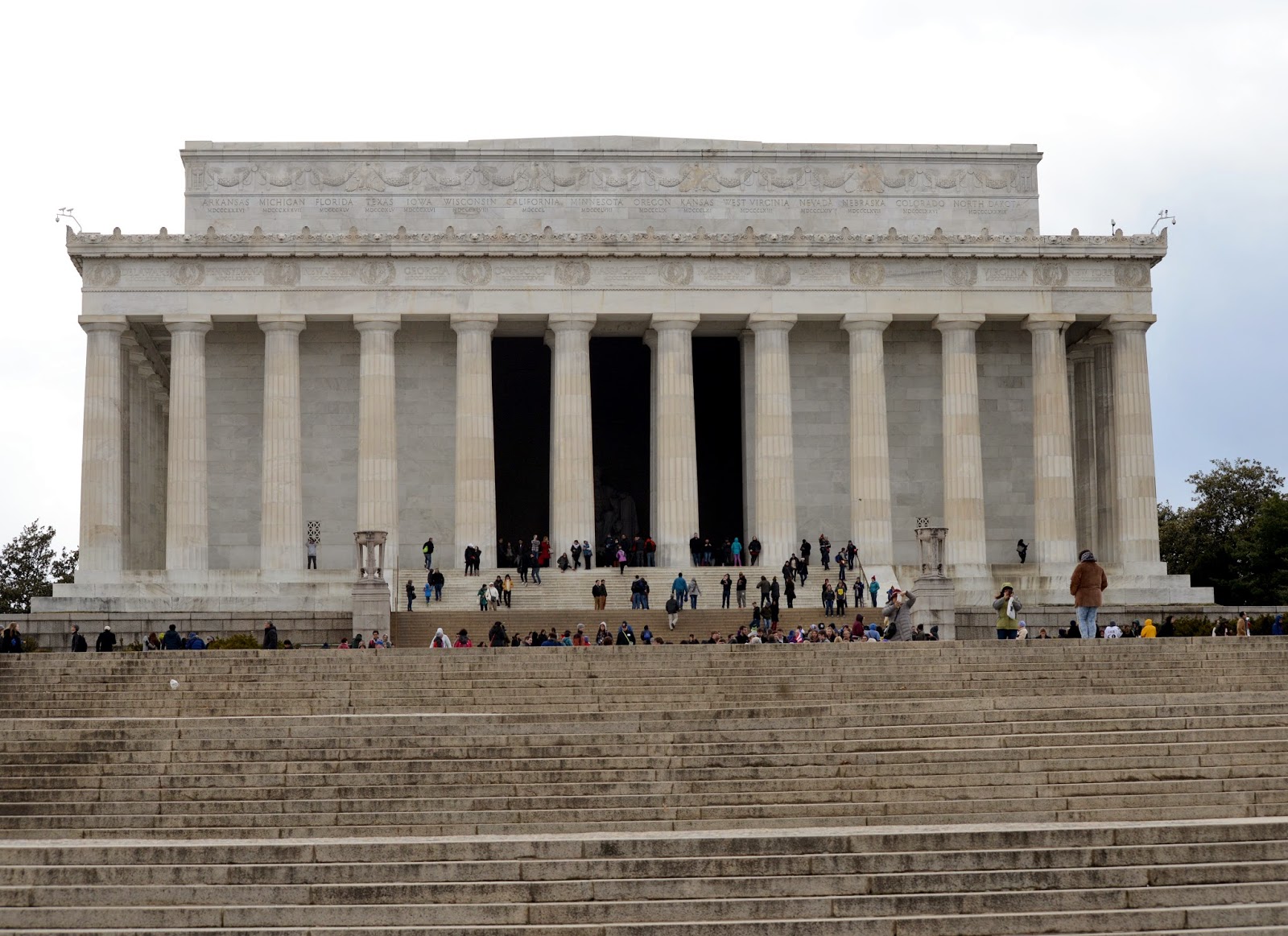 It felt like a temple to a god.  And many people within this temple felt he was a human god and sadly to say his work is unfinished, but at least it is continuing in their fight for freedom around the world. 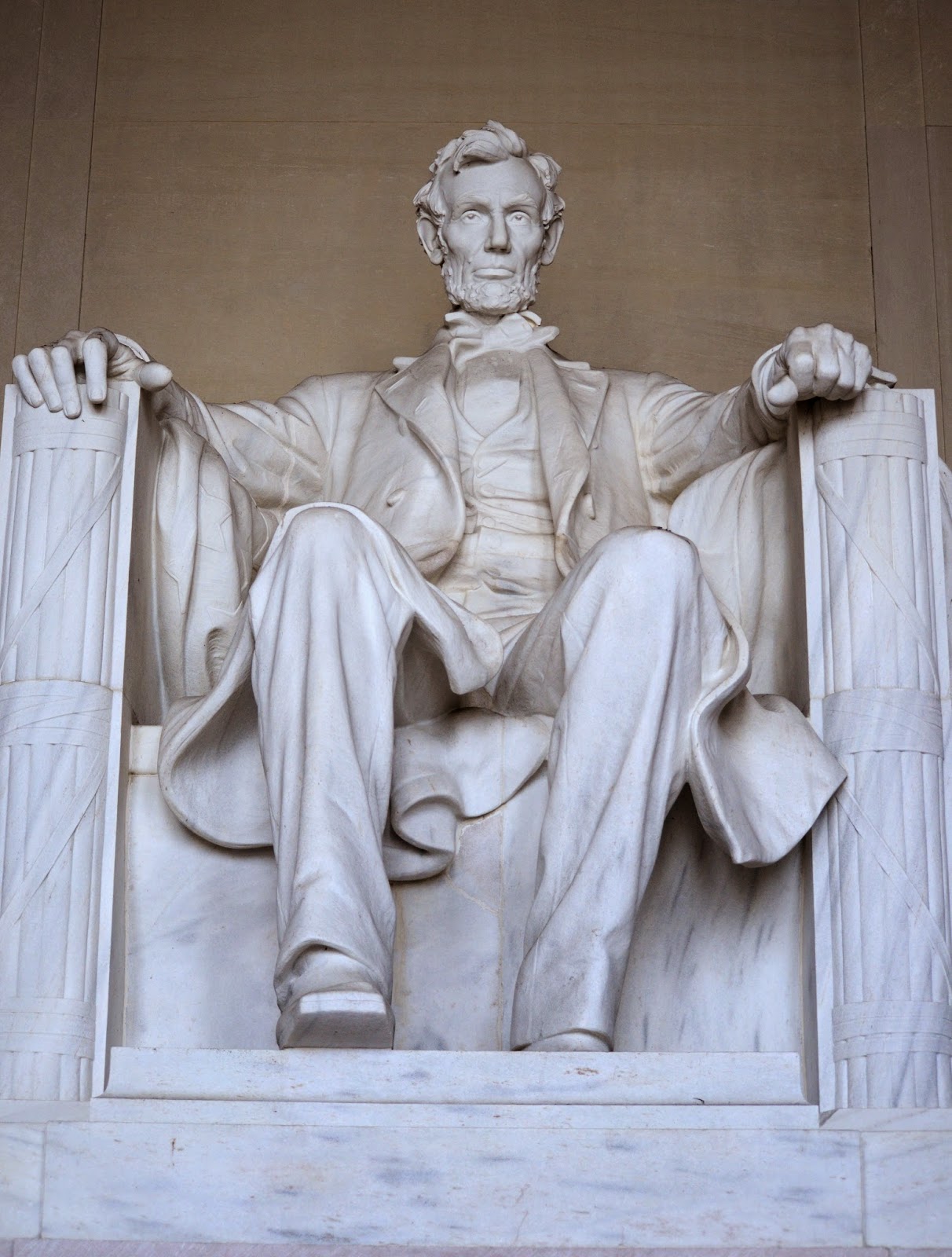 As godly as this temple felt like, there were a massive number of "selfies" being taken with Lincoln in the background.  I had never seen so many of those "selfie sticks".  LOL 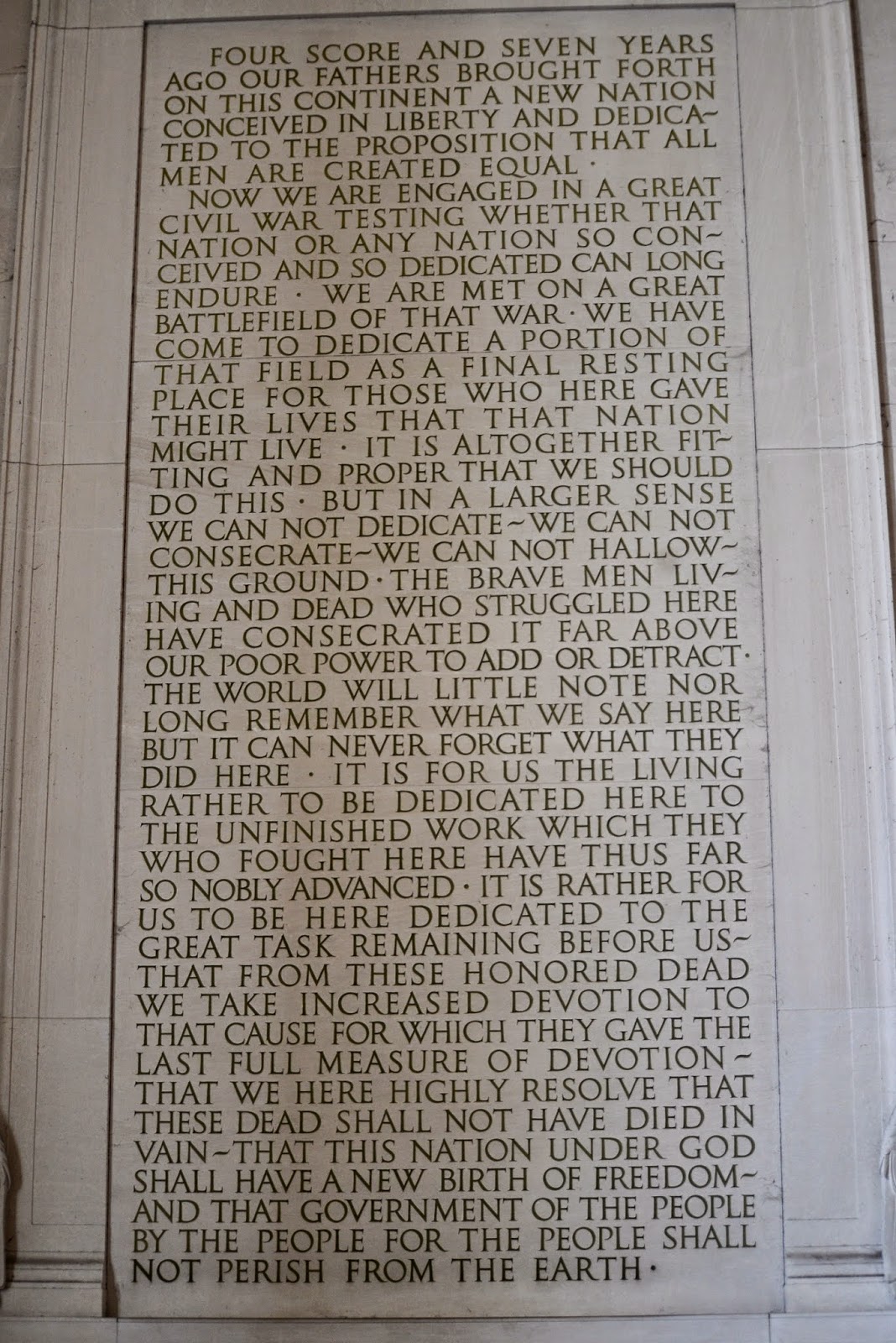 The view from the Lincoln Memorial down to the Washington Monument and you can just see the Capital behind it. 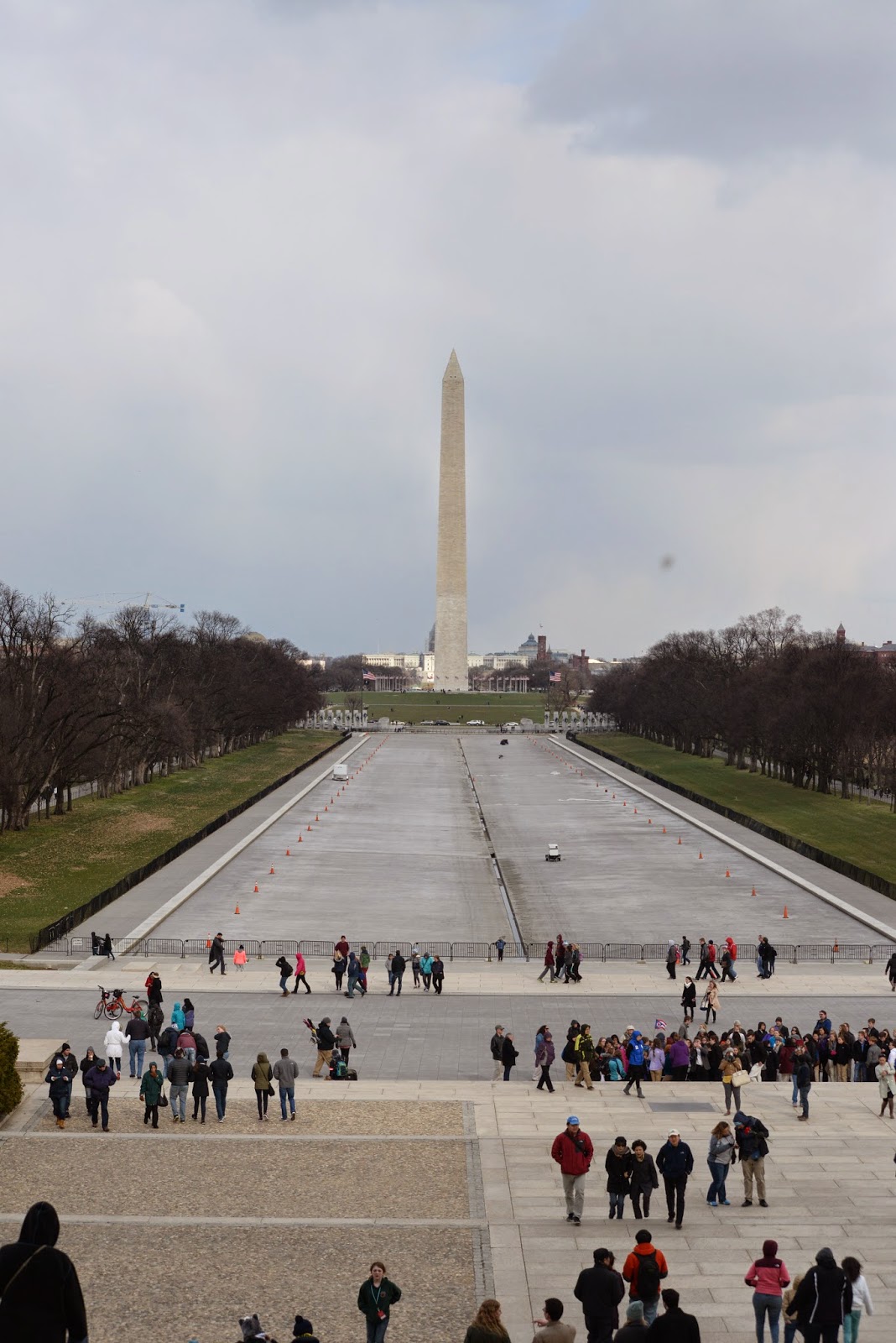 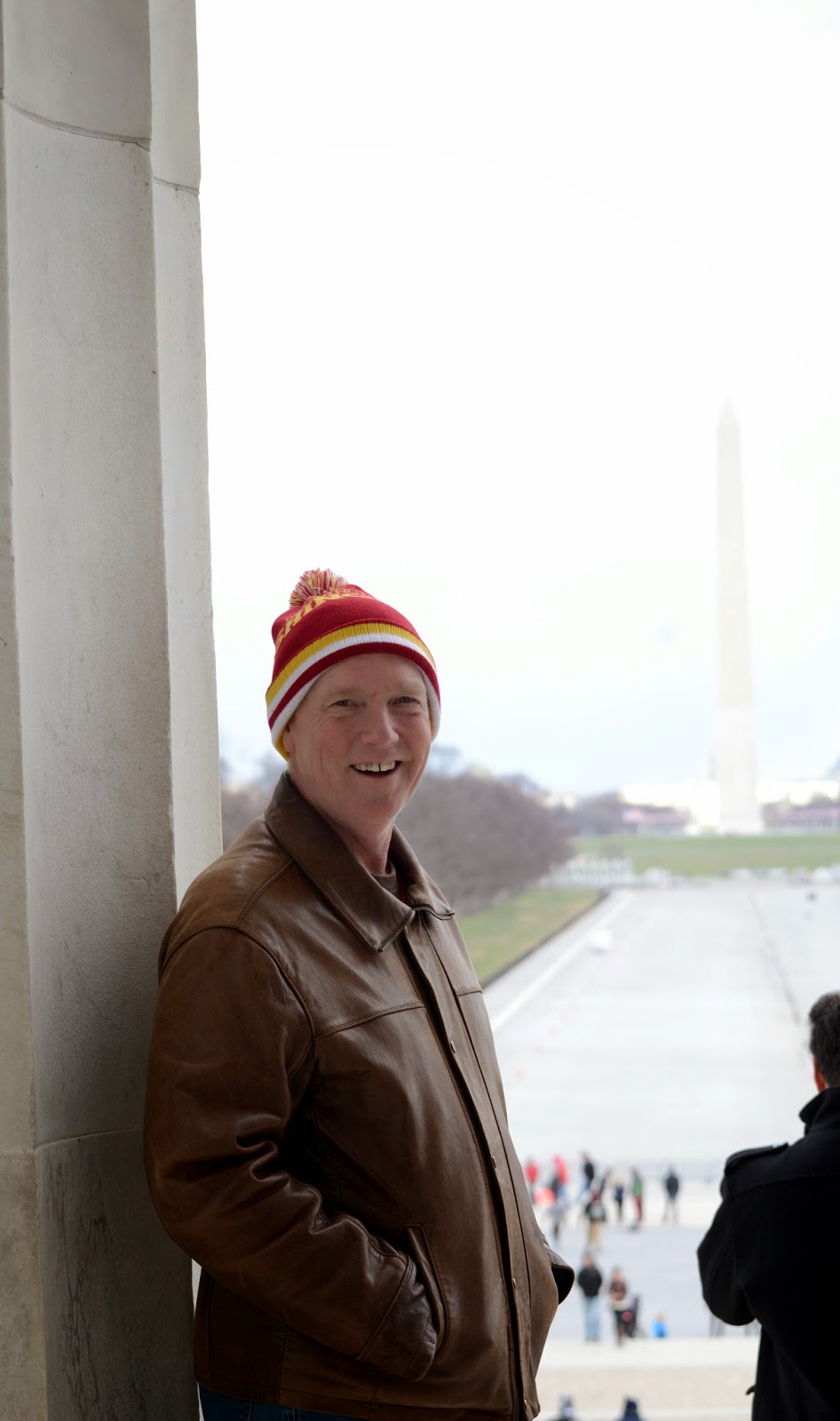 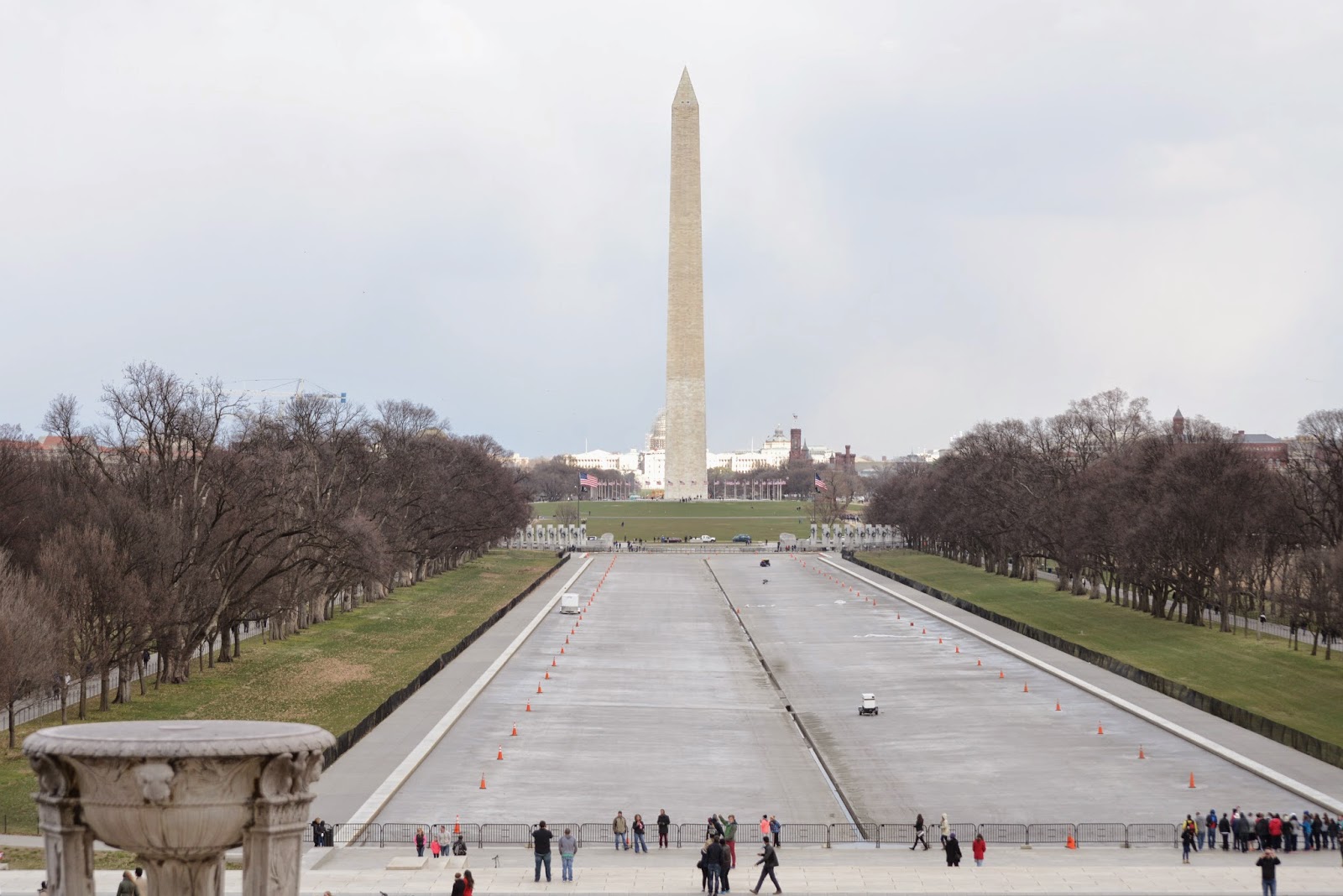 Next stop was the memorial for the Korea War.  The pain and misery etched in their faces was heart wrenching.

"The figures represent a squad on patrol, drawn from each branch of the armed forces; fourteen of the figures are from the U.S. Army, three are from the Marine Corps, one is a Navy Corpsman, and one is an Air Force Forward Air Observer. They are dressed in full combat gear, dispersed among strips of granite and juniper bushes which represent the rugged terrain of Korea"  wiki 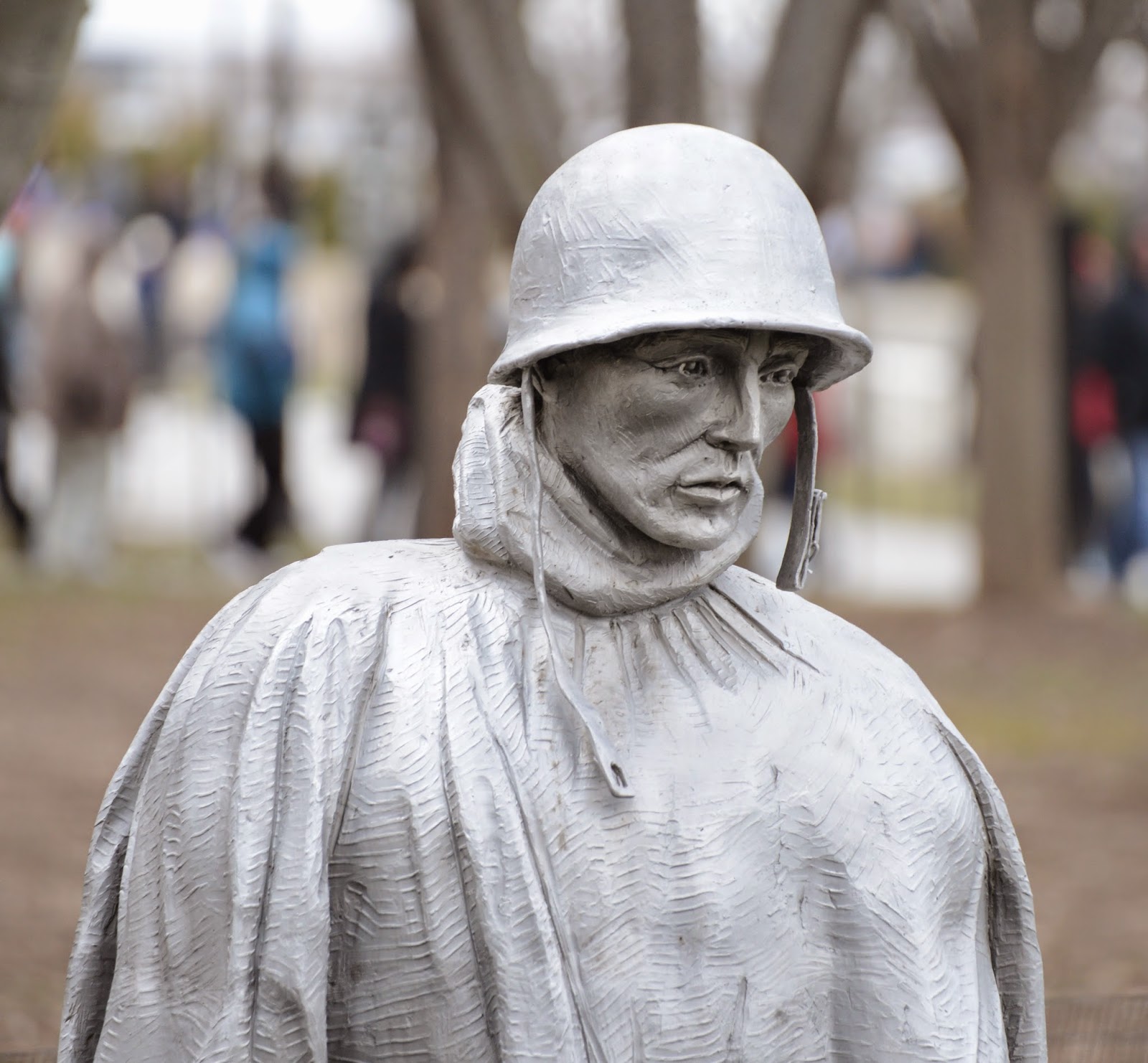 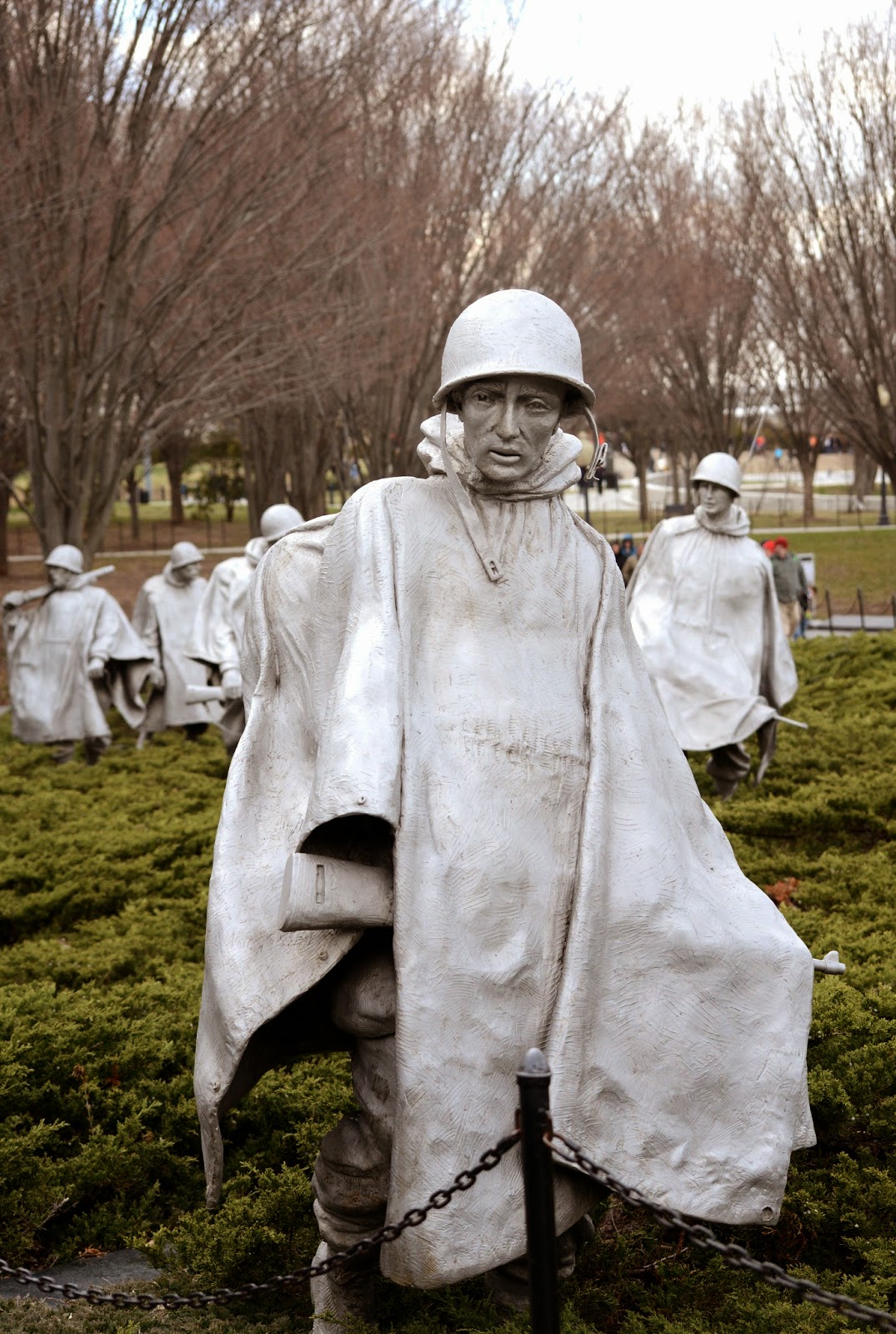 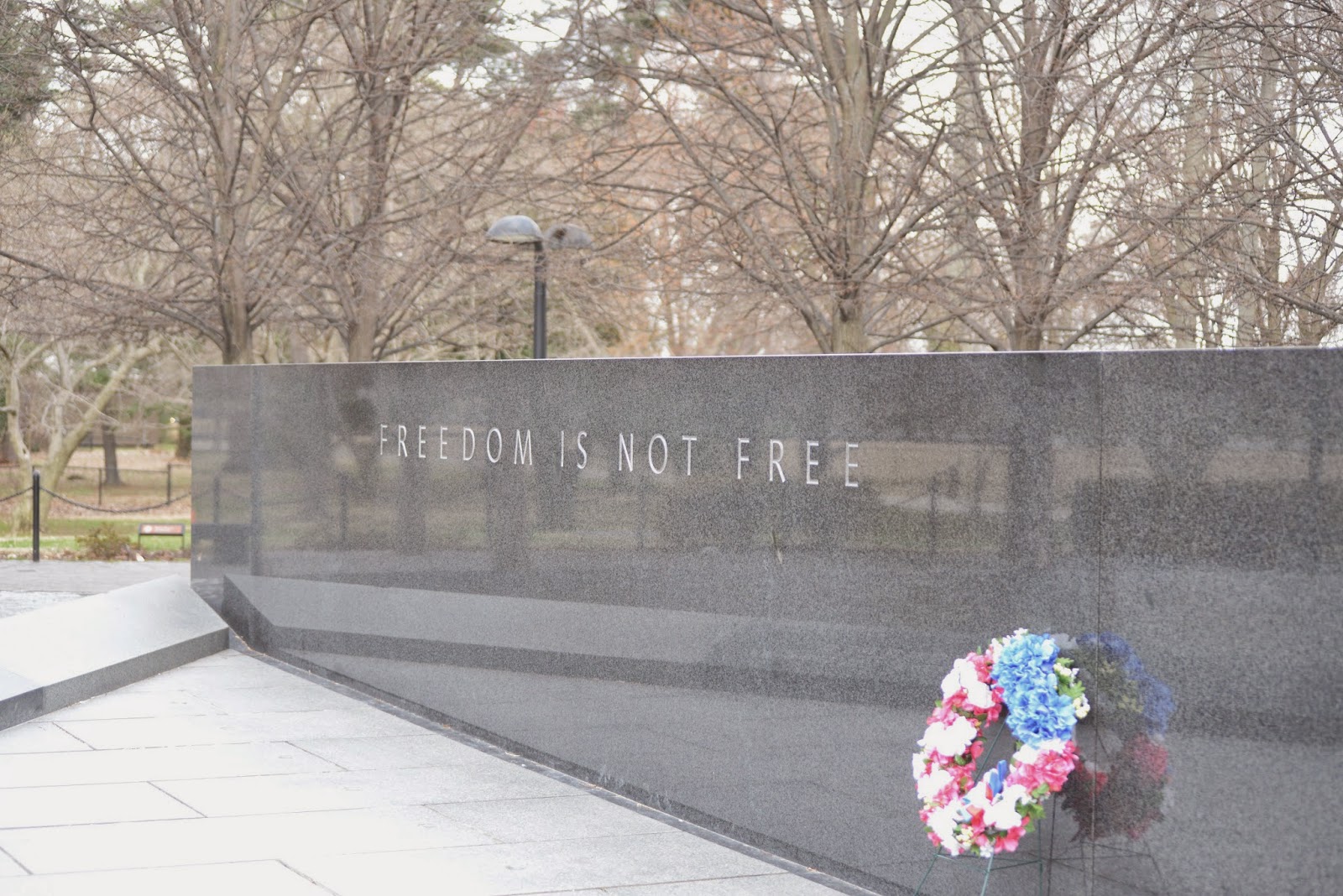 Washington DC will be remembered in my heart as "A city that remembers its heroes and their sacrifices".


As Washington DC gets ready for the Cherry Blossom Festival (which is still 2 weeks away if the weather changes), they started off with a Kite Flying contest.  They were everywhere, if you didn't keep your eyes open you would walk into strings and kites.  Not sure how they knew there were going to be gale force winds for it, but their planning was wonderful. 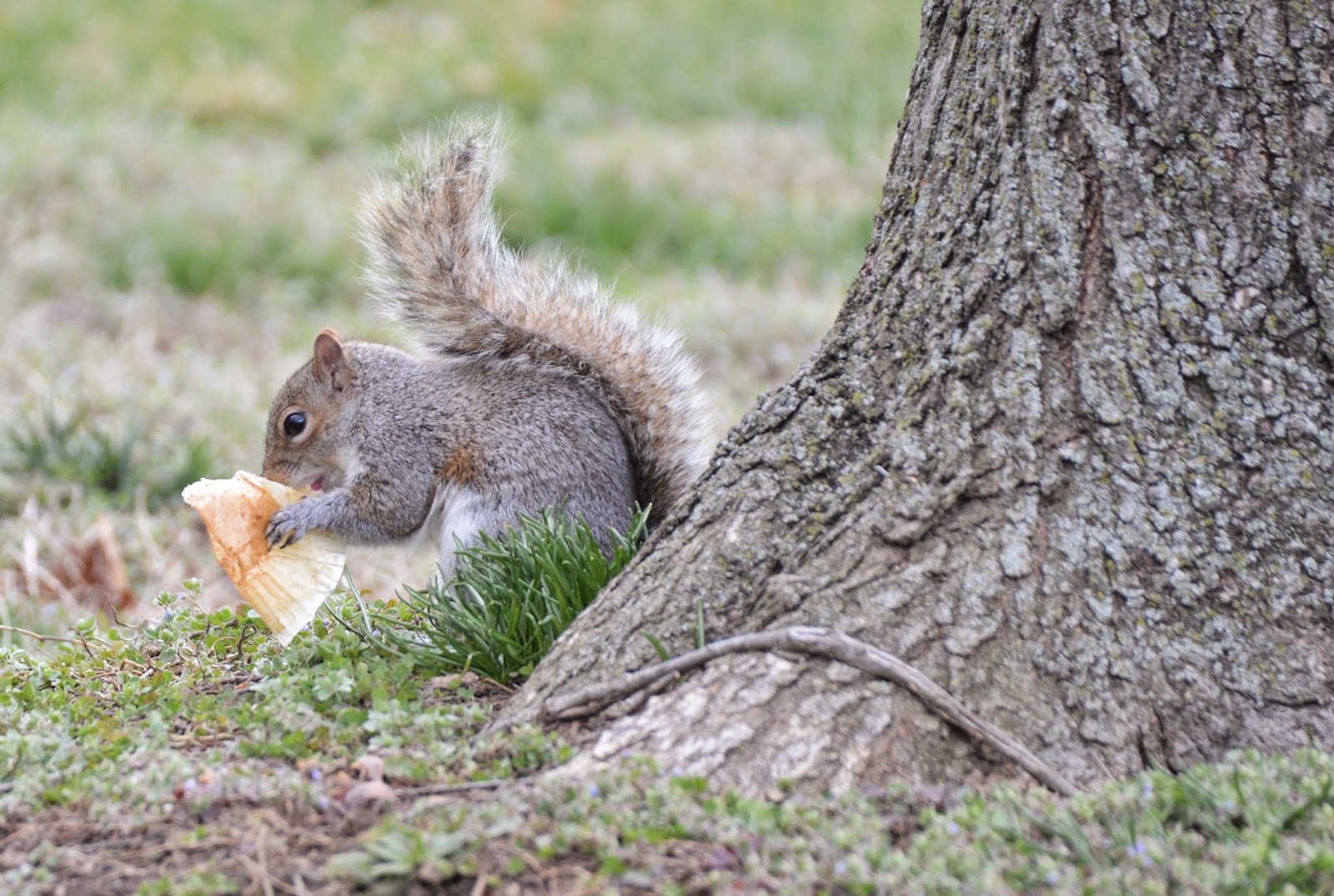 As we headed back to our hotel, cold but in awe of how beautiful this town centre is.  The executive offices, the brownstones, the statues, the canon, were all layed out perfectly.  The Washington Monument is the largest edifice, in the city.  No skyscrapers, the river is a park.  Museum after museum, we didn't even get in to one of them.  I keep ticking things off my bucket list, but at the same time I am starting a list "Have to go back to".  Washington and especially the Smithsonian museums are being added to that list.

Needless to say all these politicians around make for some wonderful restaurants.  We head up to "Postos" an Italian restaurant just minutes from the hotel.  A bottle of wine, homemade pasta and after over 10,000 steps up and down stairs today I also had a "creme caramel".  Delicious.  Back to bed to get ready for tomorrow.