Volcanoes came to life for me in 2 books - James Michener "Hawaii" one of the best books of all time and "The Last Days of Pompeii".  I was around 12 when I read them and they became the "romantic" catastrophe for me, I couldn't get enough of them.  I feel like I am battling my paranoias we stayed in the shadow of Mt Vesuvius in 2013 and here I am today walking along a very active volcano.

The view below is Mauna Kea with a huge observatory on top now.  It hasn't erupted in 4500 years, but always has the potential.  As we have been driving around Hawaii there have been these mounds, I didn't realize that most of these mounds are craters that at one time or another have erupted.  There is a lot of activity underneath Hawaii still and these craters are ways of relieving the pressure. 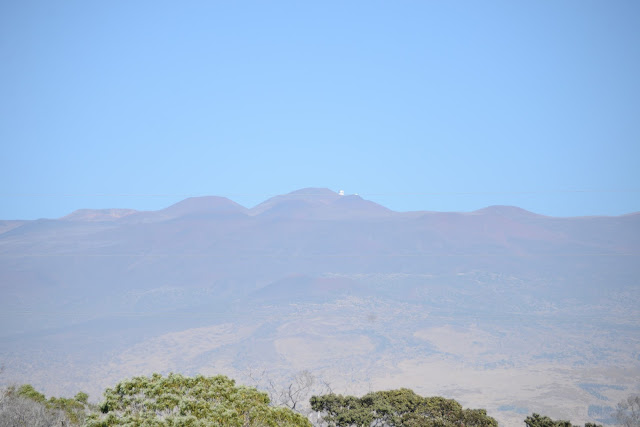 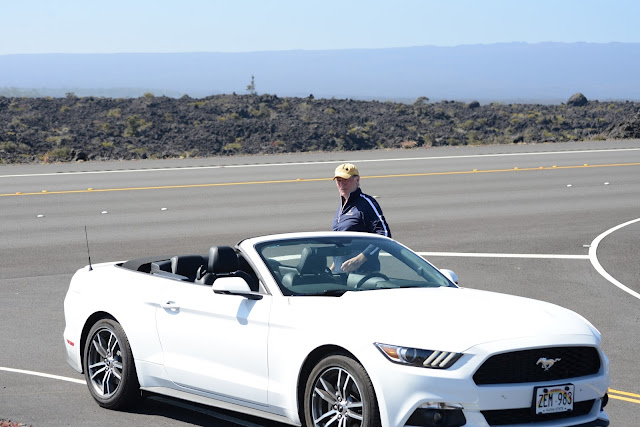 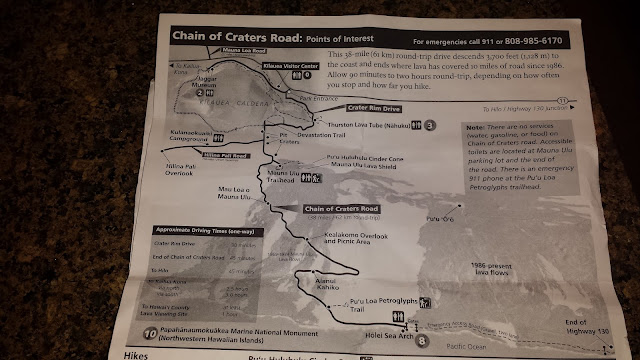 The Hawaii Volcano National Park is magnificent.  Jim and did it in 1 day but if I was going to do it again, I would add 3 extra days to my trip (lol wouldn't that be nice) and travel around the island to different points and then the final 7 days stay at our resort.  It was a 2 hour drive on an amazing highway the Daniel Inouye Parkway, which skirts the bottom of Mauna Kea and takes you over to Hilo, the biggest issue is weather.  Mauna Kea seems to have a big dark cloud sitting over it every afternoon.

The park costs $15 for a permit for 7 days, what a bargain, there are great facilities everywhere we have travelled around the island.  The Visitor Centre is very informative and as you can see from the map above, very easy to travel around once inside the park whether you want to walk or drive or bike :) (if they can figure out how to transport my bike and I back up the mountain I might be tempted). 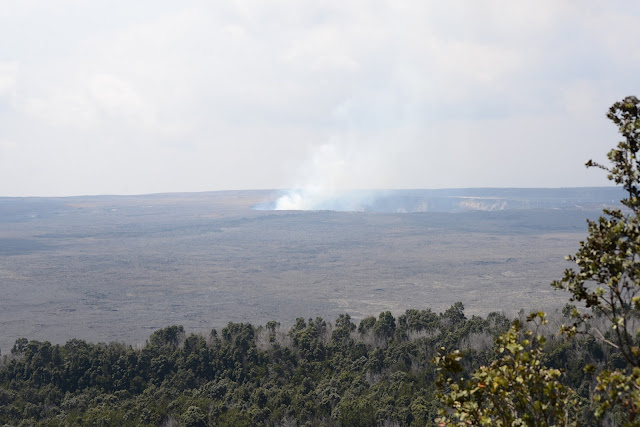 We started off walking, starting at the Volcano Inn (amazing views, you could have a mimosa and sandwich overlooking the crater, definitely the place to stay for a night).  btw be careful of bags of chocolate covered macadamia nuts, we picked them up with a sandwich not realizing the nuts were $25US.  Having no idea what the "steam vent walk" was we thought we would start there.  A 1.3 mile walk along the ridge of the crater.  It was around 11 am and as we walked along it got hotter and hotter.  We had actually packed long pants and sweaters as it is often cold.  Luckily we hadn't changed.

A little ways ahead sure enough is a hole in the ground with steam coming out of it.  Then another one, then a ridge, it was amazing, this is actually the volcano letting off steam from deep inside the earth.  You are warned that if you smell sulphur get out of the area quickly and do the windows up in your car.  You used to be able to drive around the crater but part of the road had lava go over it and the other part has high amounts of sulfur dioxide gas. 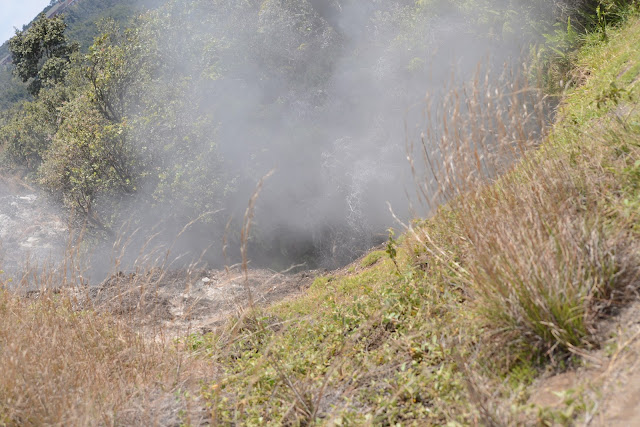 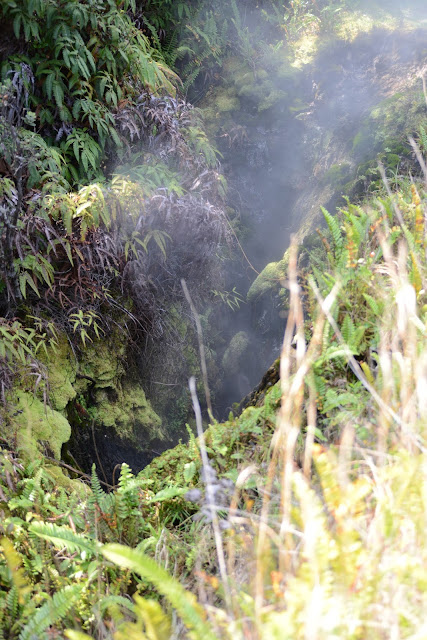 After our walk we drove out to the crater rim, where we learned that the volcanoes of Hawaii are actually adding land mass to the island.  There is another volcano just off the coast which they figure in 10000 years will have added another whole county to Hawaii. 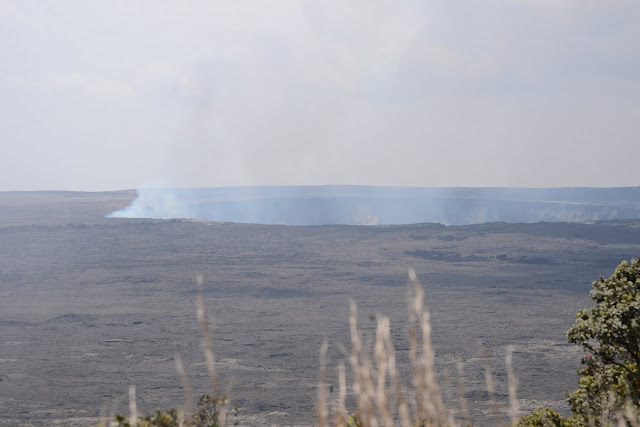 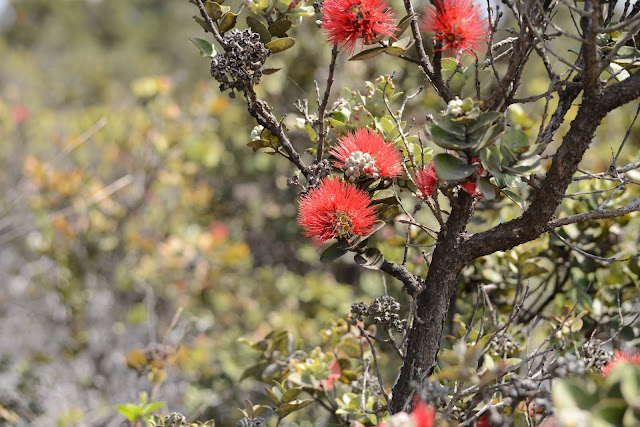 Nothing like a walk in the rainforest for a break from the heat, just don't stop by a steam vent for too long. 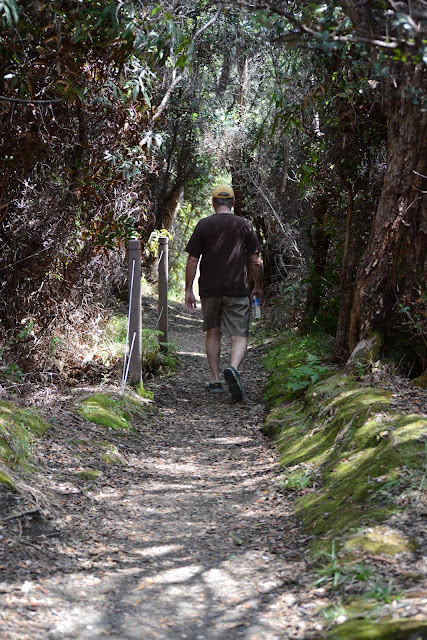 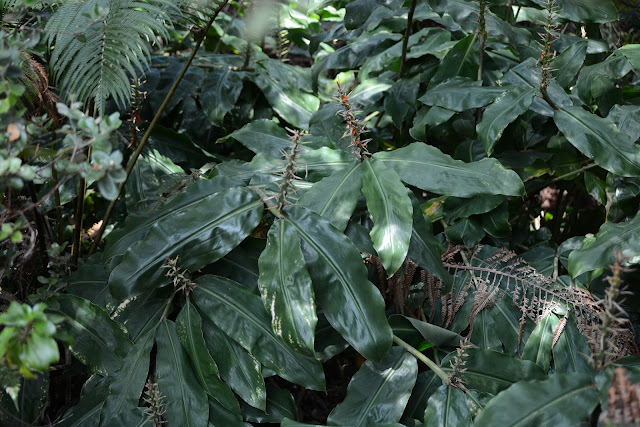 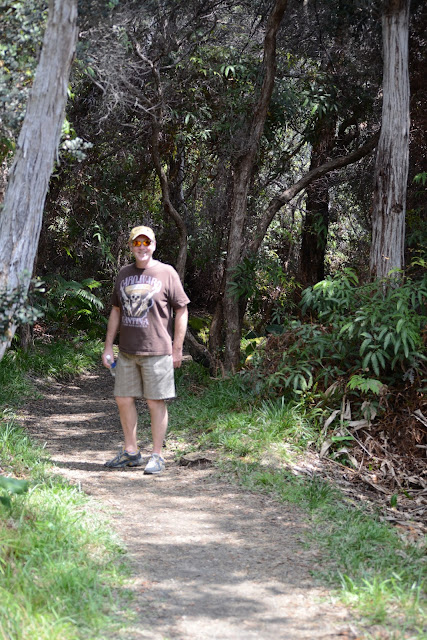 When this crater first exploded it was 700 feet higher and cone shaped, eventually the cone fell in on itself as it was hollow (make sense right).  At that point it was 2000 feet deep, over the years the lava kept bubbling up and it is only 400 feet deep now. 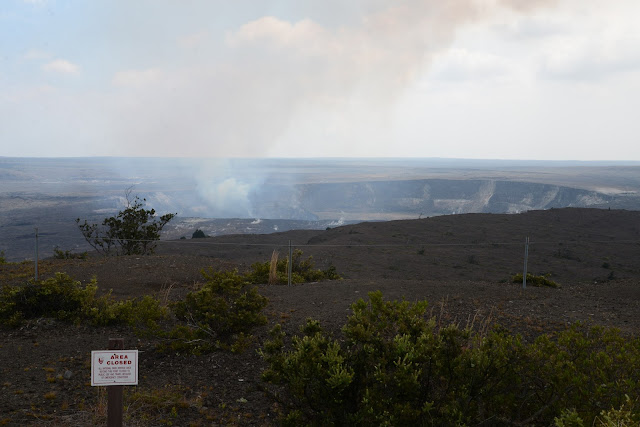 Below is the view from the Kilauea Iki Crater. 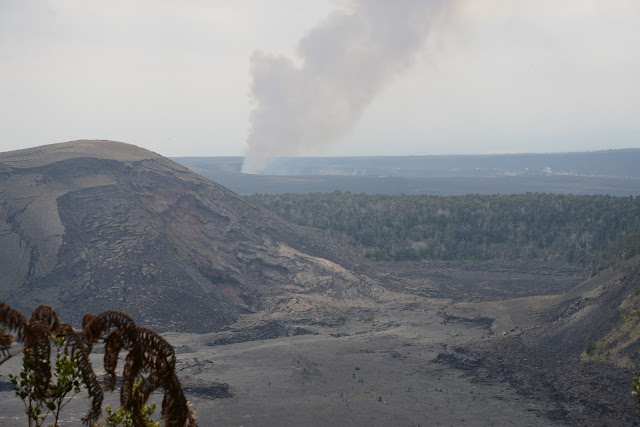 Next stop is the Thurston Lava Tube.  These tubes project right out into the ocean, during the day you see steam rising from the water and at night you can actually see the lava.  As good as the driving is around Hawaii we had no interest in driving 2 hours at night.  So next trip. 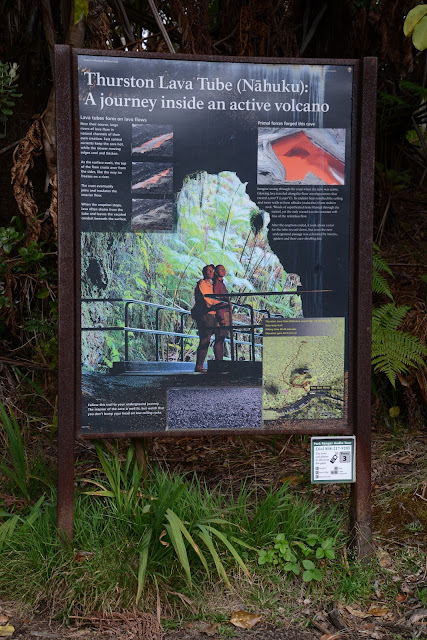 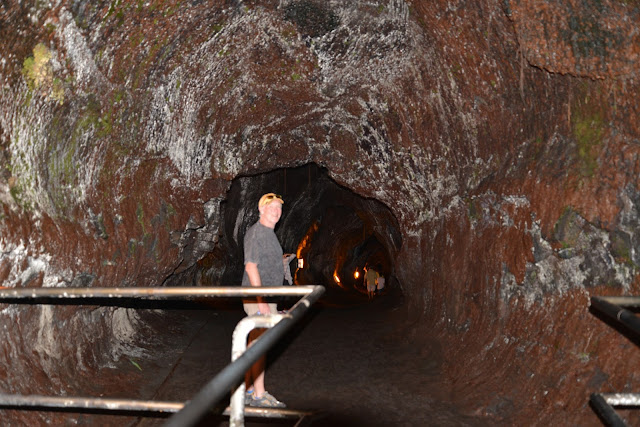 The rain forest on top of the lava tube was amazing, birds just twittering like crazy.  I guess they would let us know if the volcano was going to erupt :) 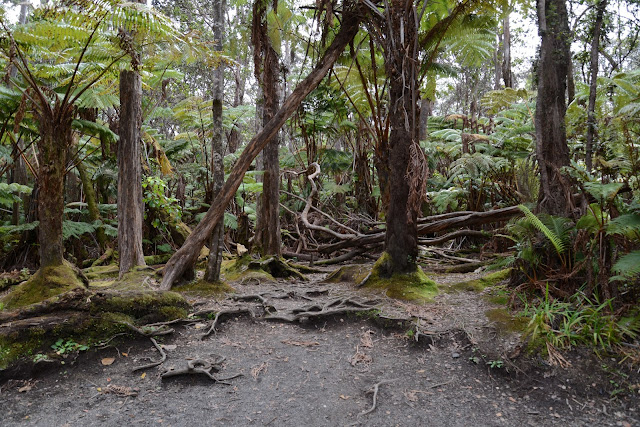 The drive down to the coast takes about 45 minutes with no stops.  We made it halfway down to Kealakomo Overlook, the road was great.  Roof was down and Jim was only going 20 miles over the speed limit, but we were the only ones on it.  Amazing.  I only screamed once. 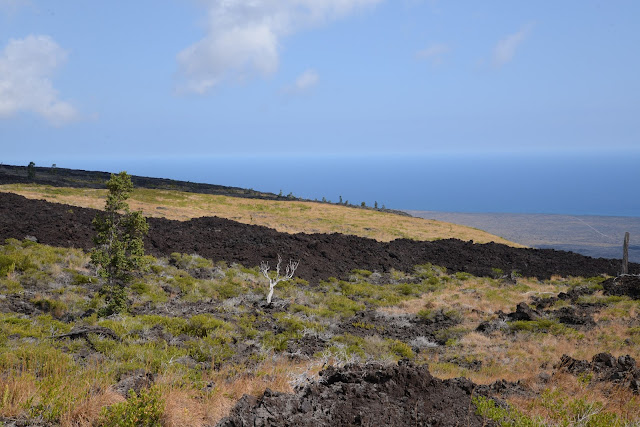 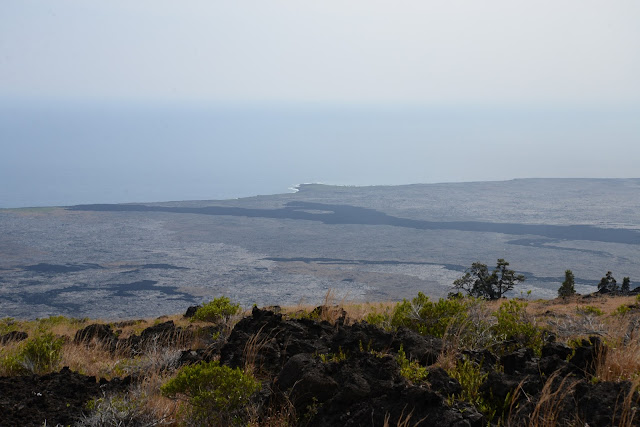 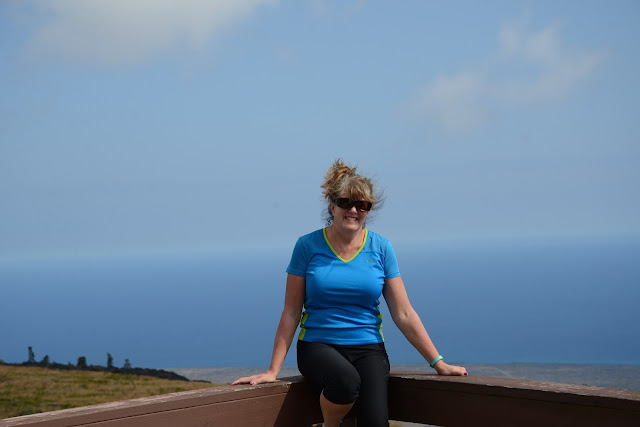 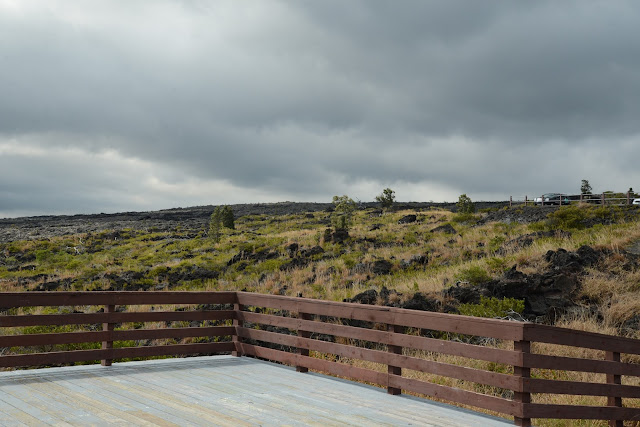 Standing on recent lava.  In 2013 the lava wiped out a house bordering the park, they were getting ready to evacuate the town when the lava stopped.  I gather it flows much slower when it is constantly releasing versus the big ka-boom. 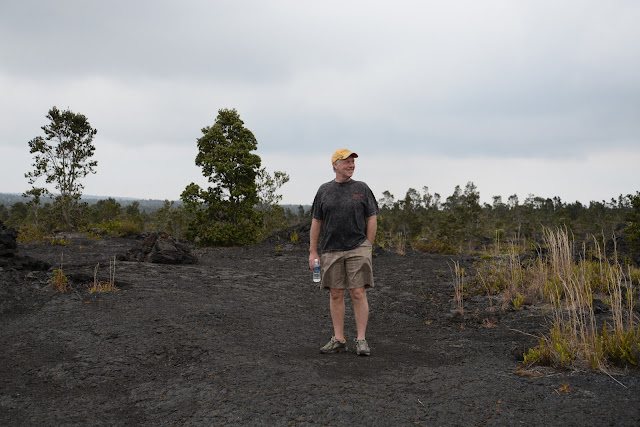 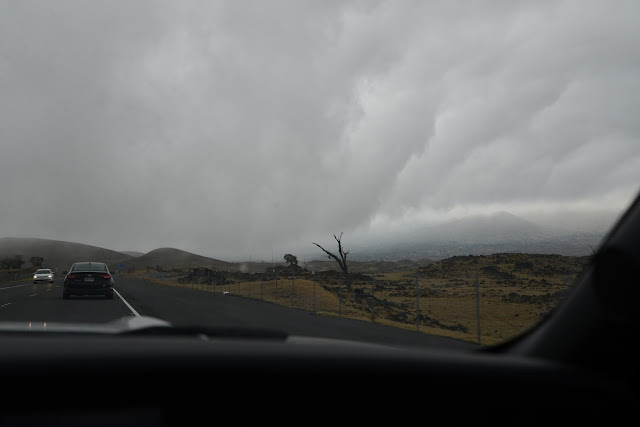 What a wonderful day, 8000 steps, lots of fresh air and a visit to an amazing part of the island.  The above is Mauna Kea and sure enough the cloud had moved down the mountain to the road, we actually had to turn our windshield wipers on, but it was again more mist than rain.  The temperature had dropped from 29 to 12 degrees as we skirted Mauna Kea, I actually had to turn my heater seater on :)